I had this problem on a customer site today and I hadn't seen it before. A task sequence failed intermittently (but often) on two particular applications (one was an SCCM application and the other a package/program). These apps had nothing in common, besides being consecutive in the task sequence. 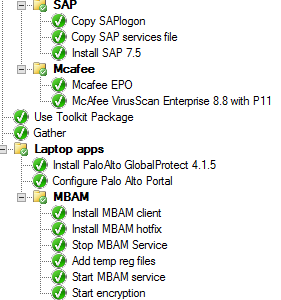 The SMSTS.log file told me that that installations failed because:

Another installation is already in progress. complete that installation before proceeding with this install. (error: 80070652; source: windows)

I really didn't understand this as everything else looked ok in the log file. Palo Alto VPN client and MBAM were the two apps that regularly failed without any obvious reason. The only thing I could see that they had in common was that they closely followed McAfee VirusScan in the task sequence. Like many other ConfigMgr-related issues, could McAfee be the problem?

I looked at the application event log and sure enough I found McAfee-related activity long after it had returned an exit code of 0, thus allowing the task sequence to continue. Further installations were not possible as McAfee was still doing it's thing and the task sequence just failed.

Guess what? I just left it there where it belongs :)

I hope this is helpful to anyone else who encounters this behaviour. Until next time...