I've configured a number of Cloud Management Gateways in the past, both for customers and in lab environments. In each case I've added a Management Point and configured it to use HTTPS. I've had to do that to manage Windows 7 clients over the Internet using traditional PKI. Recently I rebuilt my ConfigMgr lab to prepare demos for MMS 2019. As I'll just be using Windows 10 it has given me the opportunity to try Enhanced HTTP for the first time. I had a few problems to figure out along the way (with the help of Nick Hogarth, thanks Nick) but, now that it is configured correctly, everything works really well.

So what is Enhanced HTTP all about?

Traditionally we've used PKI to secure communication in ConfigMgr environments. Microsoft still recommends using HTTPS communication for all Configuration Manager communication. However they recognize that it can be challenging for some customers due to the overhead of managing PKI certificates. By using Azure AD integration we can simplify the process using Enhanced HTTP. In this scenario Azure AD-joined devices can communicate with a management point configured for HTTP. The site server generates a custom certificate for the management point allowing it to communicate via a secure channel. You can read about it here

The ConfigMgr admin doesn't need to do any IIS configuration as this is done in the background. We'll see that shortly.

There are a number of steps which I implemented as follows. 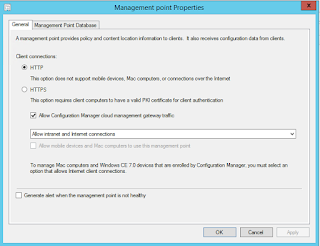 Enable the site option to Use Configuration Manager-generated certificates for HTTP site systems. 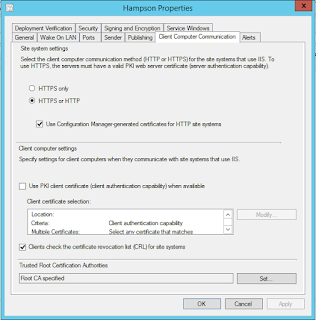 The SMS Role SSL Certificate was automatically configured and bound to port 443. 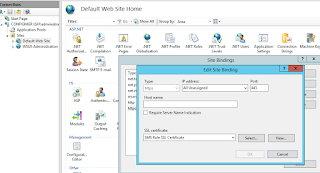 Onboard the site to Azure AD for cloud management 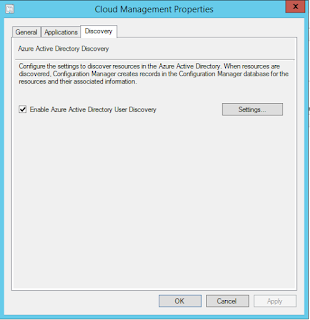 I was using domain joined devices for testing so I needed to configure Hybrid AD Join. Hybrid AD Join is configured using Azure AD Connect. A Service Connection Point is created during the process. 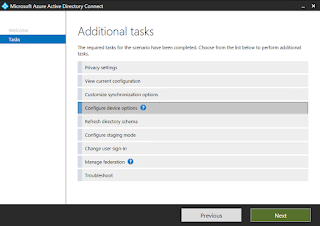 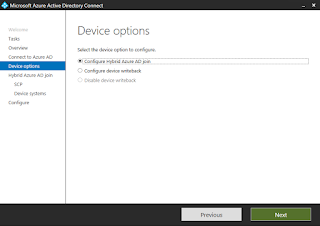 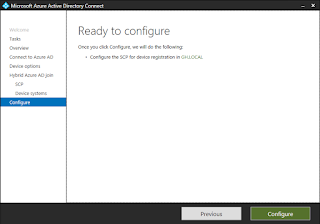 The SCP was created.

No further action should have been required because, once Hybrid Azure AD Join is enabled, devices will automatically join to Azure AD by default from Windows 10 Version 1607.

What issues did I experience?

I experienced a couple of issues during the process. In each case it's because I had forgotten to do something.

Firstly my test client could not be detected on the Internet. There were several errors in the CcmMessaging and LocationServices log files. 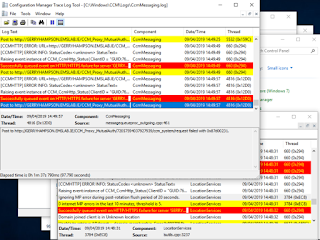 
Also the CMG Analyser failed (it was OK when run against a certificate but not against an Azure AD User). 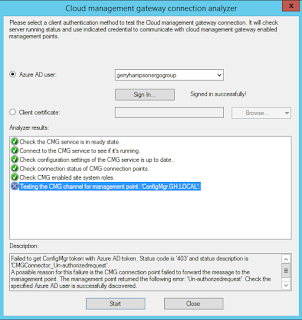 Failed to get ConfigMgr token with Azure AD token. Status code is '403' and status description is 'CMGConnector_Un-authorizedrequest'.
A possible reason for this failure is the CMG connection point failed to forward the message to the management point. The management point returned the following error: 'Un-authorizedrequest'. Check the specified Azure AD user is successfully discovered.

I had to figure out what was wrong and this is where Nick helped me. First I looked at the CMG Analyzer error. It looked pretty clear. "Check the specified Azure AD user is successfully discovered". 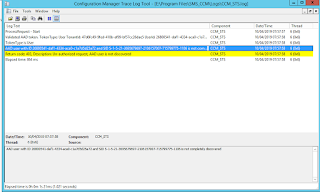 Also I could see errors in the CCM_STS.log file on the site server.

I knew that Azure AD Discovery was enabled but I still couldn't see any users. After I rebuilt the site I had forgotten to enable AD User Discovery. This is also a requirement. 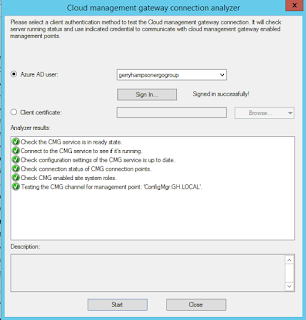 I did that and could successfully run the analyser.

I also had an issue with the test device. It should have automatically joined Azure AD but it didn't. 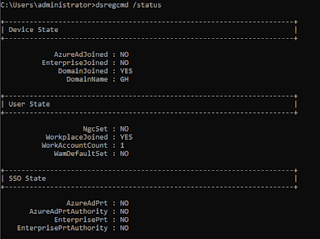 See the output of the dsregcmd /status command. AzureADJoined: NO 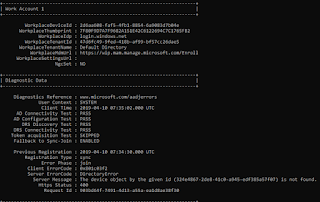 The output also gave more information: The device object by the given ID is not found.

I couldn't understand that. I had configured Azure AD Join in Azure AD Connect which should have synchronized all the computer objects to Azure AD. 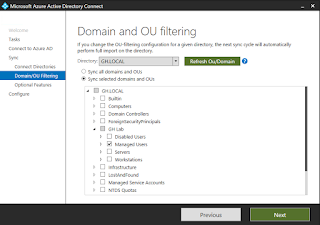 I had a look at the Azure AD Connect configuration again and realized that I had forgotten to select the Workstations OU to synchronise. I didn't need to before. I was only interested in users at the time. 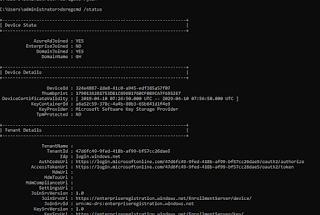 After synchronization the device joined to Azure AD. 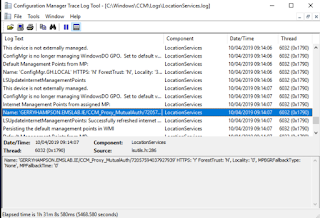 No more errors in the LocationServices.log file.....

...and in the ConfigMgr console the device was Online over the internet.

It could also be seen as a Hybrid Azure AD joined device in Azure AD.

I hope this helps someone else to configure the Enhanced HTTP solution. Until next time......

This week I've been rebuilding my ConfigMgr lab in preparation for demos at MMS 2019. Last night I added the Cloud Management Gateway. I had all the prerequisites in place. I had my certificates already and the CNAME for my external domain was configured. You can read about the certificate and CNAME requirements here

All looked good with the CMG. 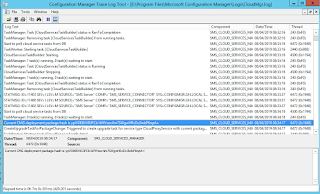 There were no errors in the CloudMgr.log file. 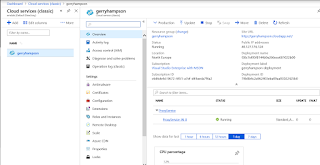 The Azure Cloud Service had been created.

My first hint of a problem was the CMG Connection Point status, which remained Disconnected. I figured it was time to run the trusty CMG Analyzer. It's brilliant for pin-pointing where the issue is. 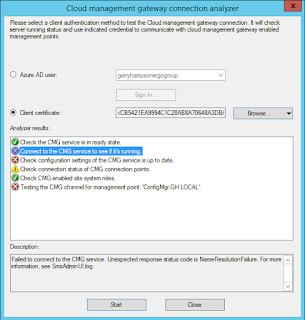 Oops - a lot of errors there.

First one - Failed to connect to the CMG service. Unexpected response status code is NameResolutionFailure. For more information, see SmsAdminUI.log. 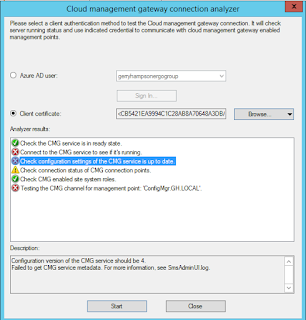 Configuration version of the CMG service should be 4.
Failed to get CMG service metadata. For more information, see SmsAdminUI.log. 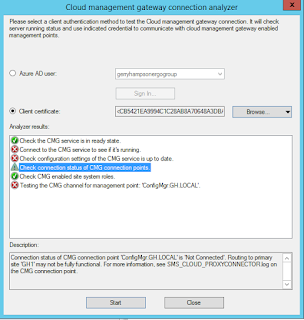 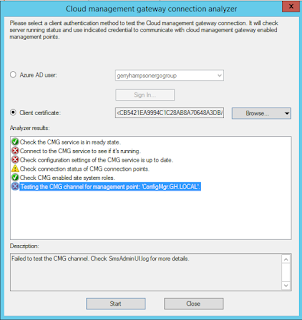 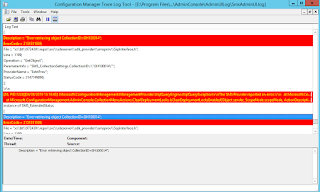 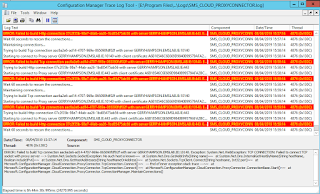 Neither does the SMS_CLOUD_PROXYCONNECTOR.log file. There is nothing there to help me.

So what was the first error again? Failed to connect to the CMG service. Unexpected response status code is NameResolutionFailure.

I previously configured a CNAME record so I didn't quite understand that.

That was the problem - no CNAME record. 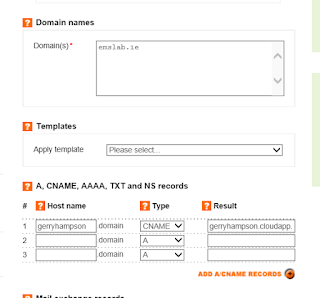 This is a test domain and someone had been messing around with the DNS records. The CNAME record had been deleted. I added it back.

Then the CNAME lookup was successful (this took about 8 hours). 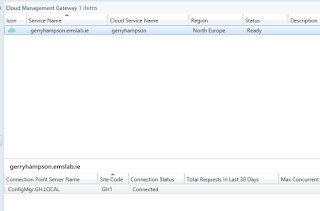 The CMG Connection Point connected with no further action from me. 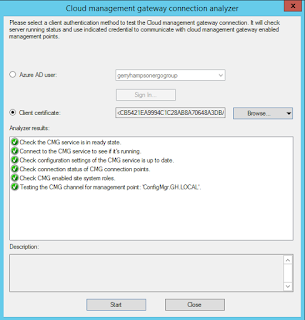 The CMG Analyser then executed perfectly. We're back in business.